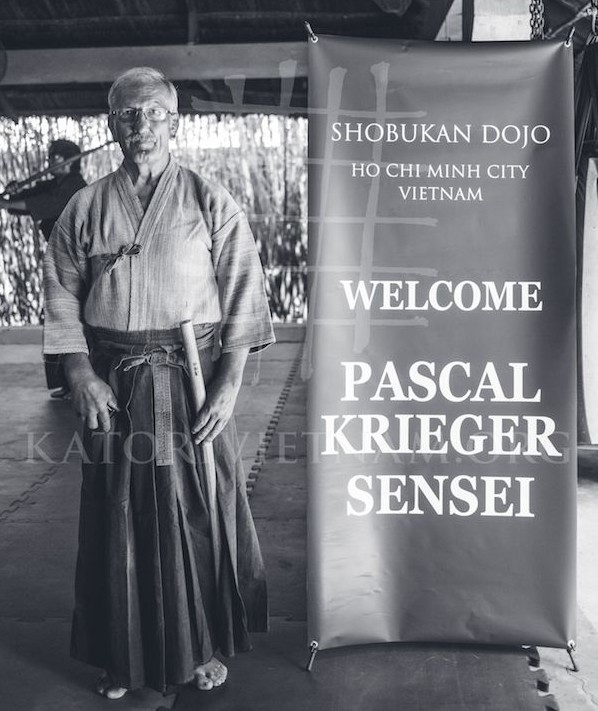 In February 2016, during the Budo Class with Pascal Krieger Sensei Shobukan Dojo Vietnam was put to work. Pascal Krieger sensei gave a 3 hour Budo class every day for a week at our dojo Shobukan Vietnam. During each Budo class Krieger sensei focused on different elements and arts. Krieger sensei shared his knowledge on Judo, Jodo, Shodo, Iaido. He also spoke about the history of Budo and Bujutsu. One of the things that permeated his teachings in each Budo class was the moral aspect of Budo. He also stressed the aim of non-violence of Budo and Bujutsu. 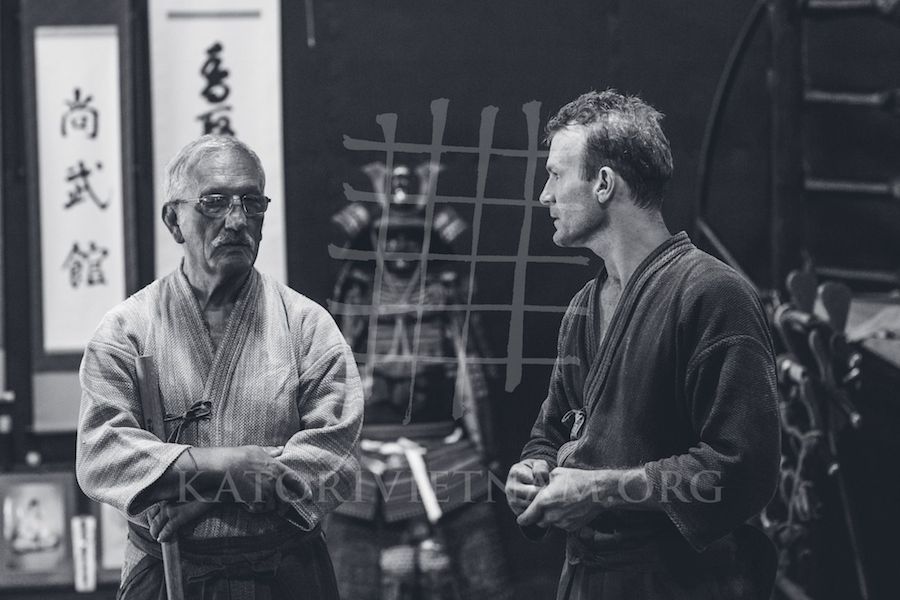 In his book, The Way of the Stick, Krieger sensei explains the difference between the aims of Bujutsu and Budo:

Budo is a martial discipline with inherent combat characteristics. This discipline is in the nature of personal education: “it might be valid only because of its efficiency but it nevertheless transcends this efficiency to allow the individual to develop morally through a personal discipline and a search for a certain aestheticism. The Budo originated in a peaceful time. 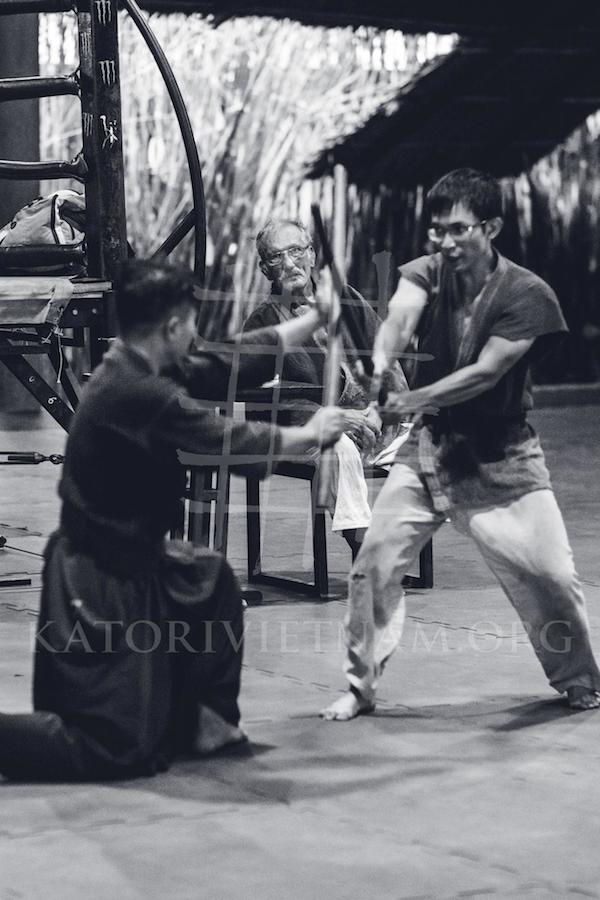 “They were designed so that anyone – regardless of social class – could develop fully through an intense personal experience. This would lead to an understanding of life as a whole and a better integration into a society seeking peace and harmony. A Budo has to be spiritual.” 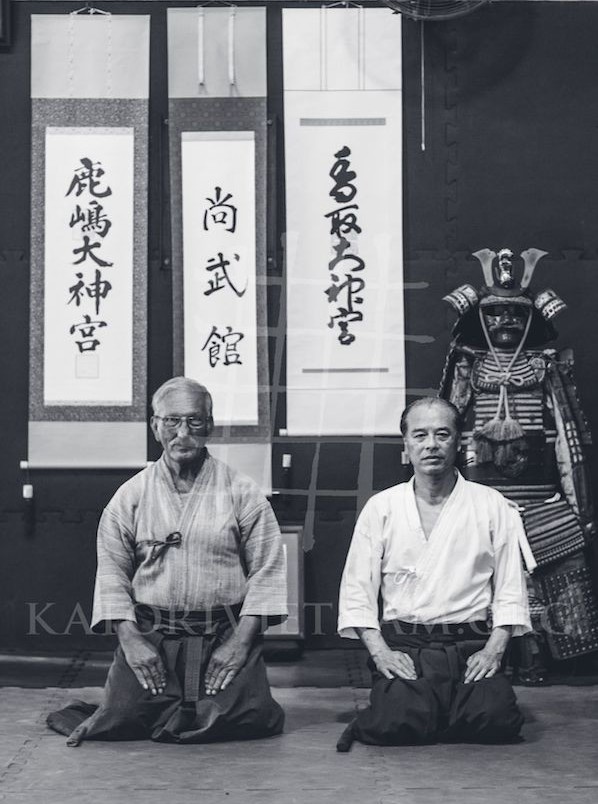 “The Bujutsu were formed by an elite to defend a group whose existence was – or could be – threatened. The notion of combat is inherent. A bujutsu has to be practical. Kobujutsu (classical bujutsu) like Katori Shinto ryu were developed for professional warriors to allow them to fight other professional warriors – implying a very high technical proficiency.” 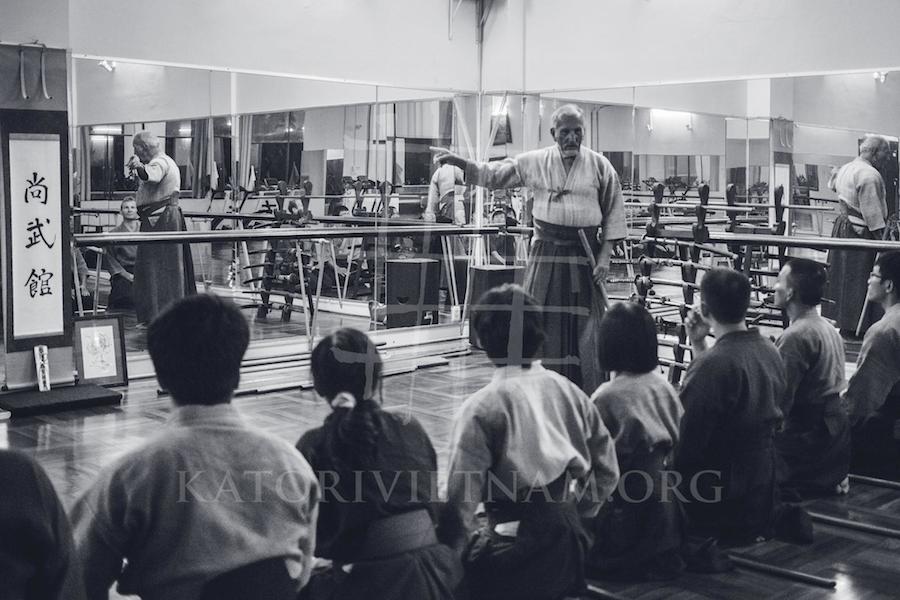 During the first budo class Krieger sensei focused on Kenjutsu and Iaido. He taught us a very useful  suburi exercise called happogiri (8 cuts, or cuts in 8 directions). This exercise can be found in Malcom Tiki Shewan’s wonderful book Japanese Swordsmanship. This exercise covers many of the cuts used in kenjutsu of different styles. Practicing suburi benefits physical movements. In addition we can practice other elements such as zanshin, metsuke and kiai. 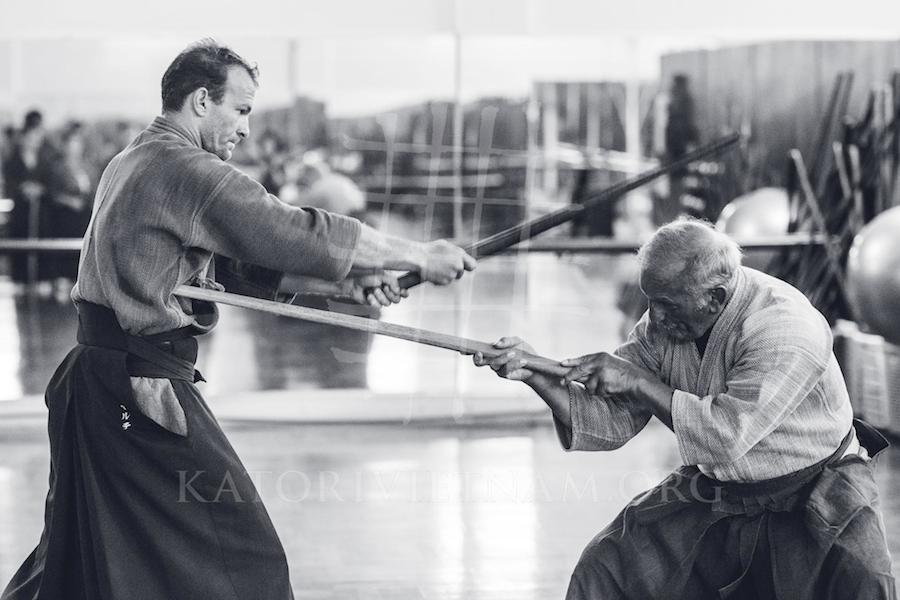 Krieger Sensei points out the location for tsuki

The second budo class focused on Jodo. Immediately the similarities between Katori Shinto-ryu and Shinto Muso-ryu could be seen. Body mechanics, targets, and even principles of strategy were much alike in both ryu. This should not be a surprise as the founder of Shindo Muso ryu, Muso Gunnosuke Katsukichi was a warrior who first trained in Tenshin Shoden Katori Shinto ryu. Although jodo is a different art altogether students of Shobukan dojo were recognize similarities within both arts. 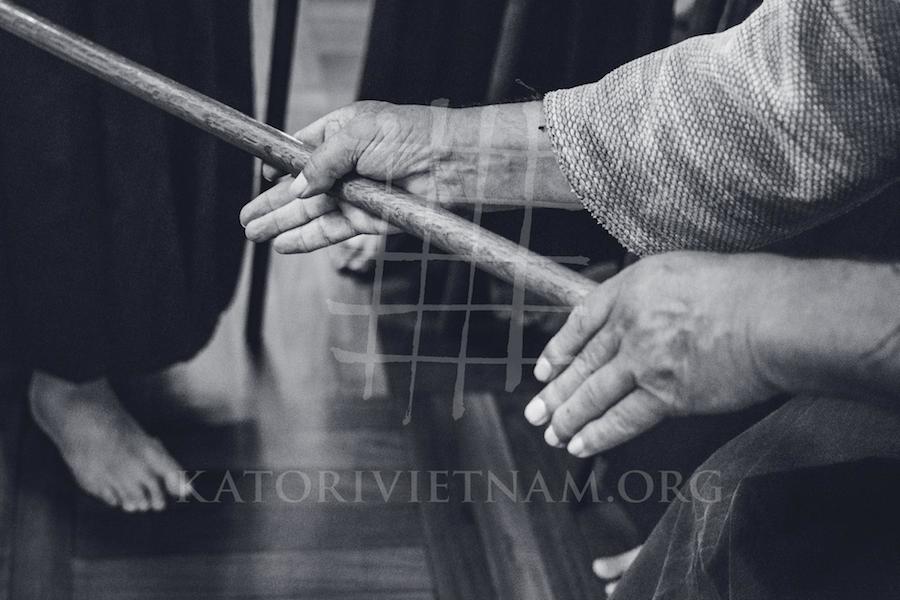 “a jo has three hundred sixty ha, a sword has only one”

The third budo class was fully focused on Judo. For that session our dojo was honored to be joined by Yanoé, Krieger’s son. We posed Krieger sensei a question: if we lose our weapon on the battlefield, how do we proceed? 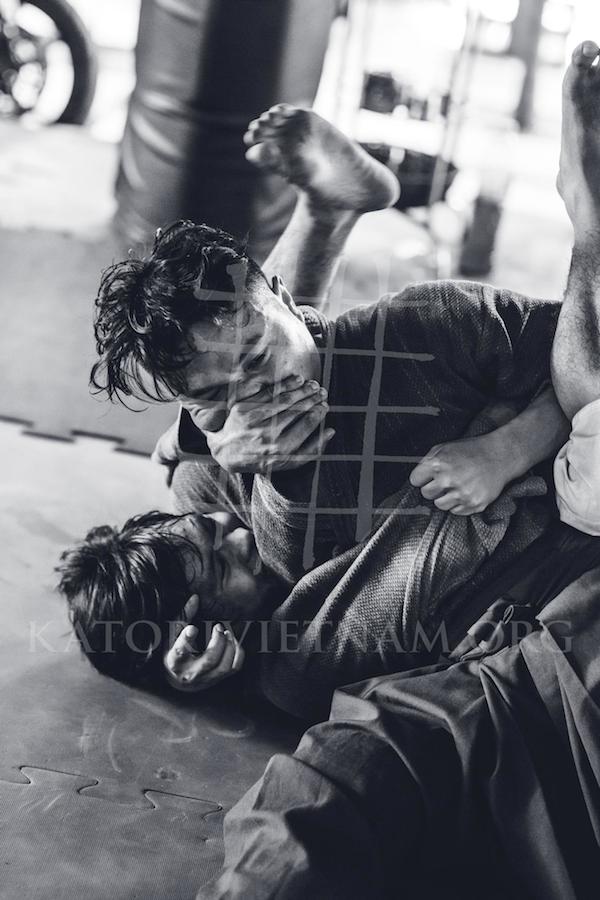 This led to a very intense session of take-downs, arm-bars, chokes and tap-outs. Several budogi were torn to pieces and some of us had to continue to train without sleeves. It was a pleasure to be choked out by a man as friendly and caring as Krieger sensei. 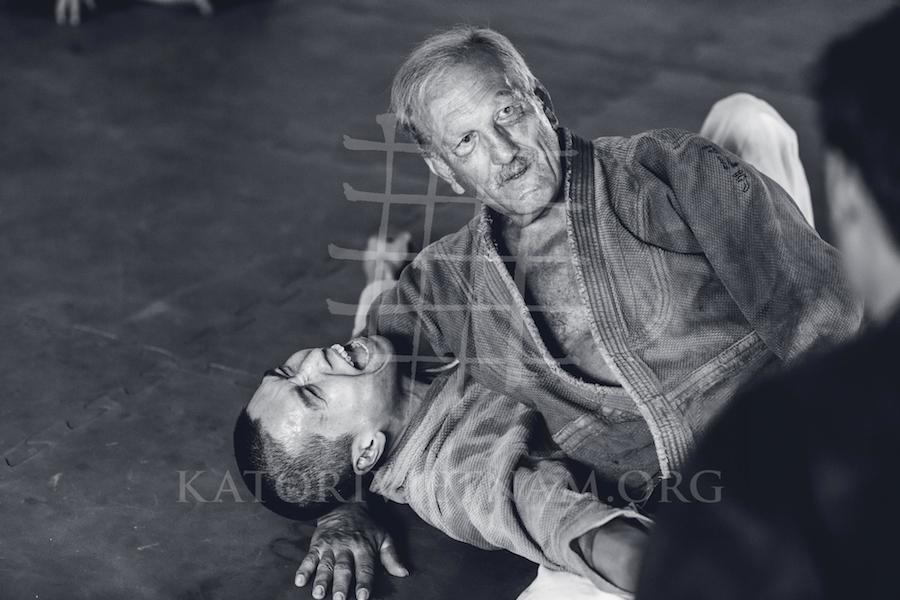 pain is so close to pleasure

All of us stood in line to be on the receiving end of one of his favourite choke holds. At the end Krieger sensei and Yanoé performed a judo kata which showed similarities to what we learn in Katori Shinto ryu. Although Katori Shinto ryu has empty hand techniques in its curriculum called yawara, only a few students in Shobukan dojo Vietnam are invited to practice these. 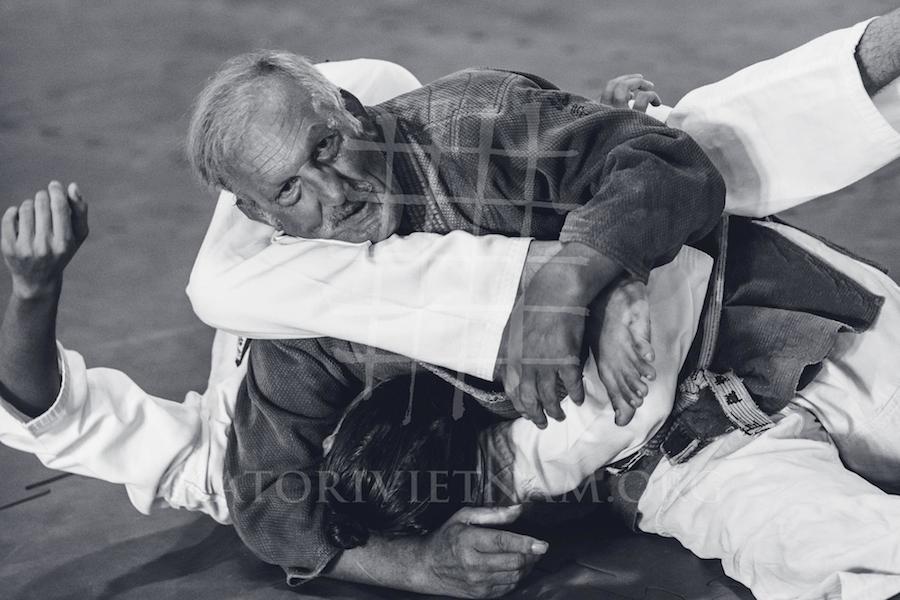 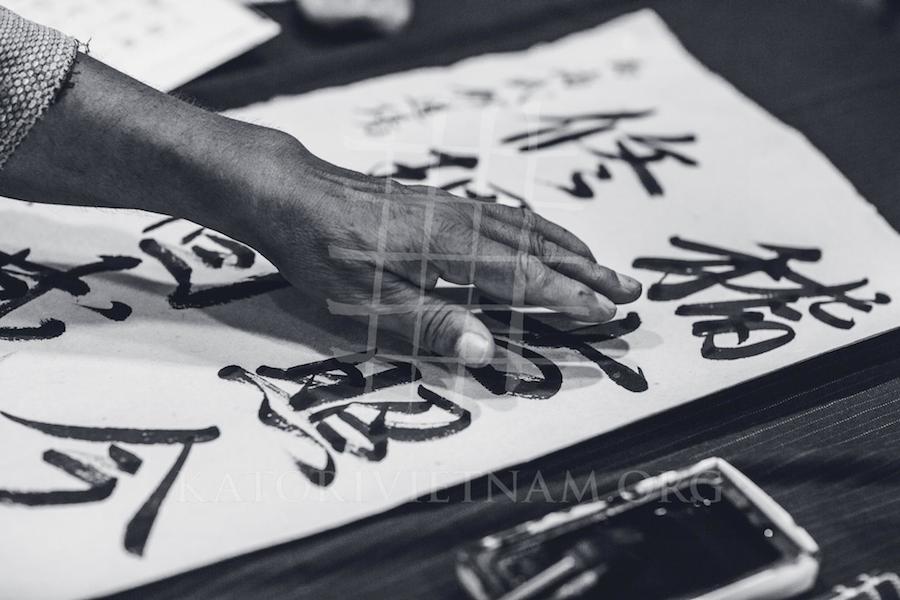 Krieger Sensei explains the meaning of the kanji

The last budo class, Krieger sensei shared some of his knowledge on Shodo with us. He was kind enough to explain us about the origin of certain budo related kanji. “Bu, Kreiger sensei added, actually means: “to stop violence”. Sensei took the kanji for “bu”. He demonstrated how it is made up of the words “to stop”and “arms of war or violence”. The character for “arms of war” actually looks like a naginata.  He also presented all students with a personal calligraphy. 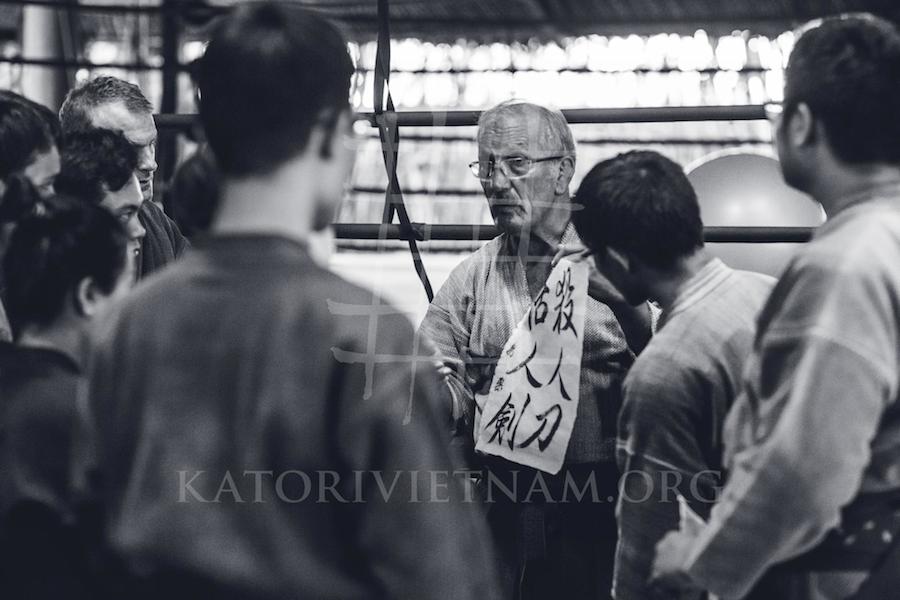 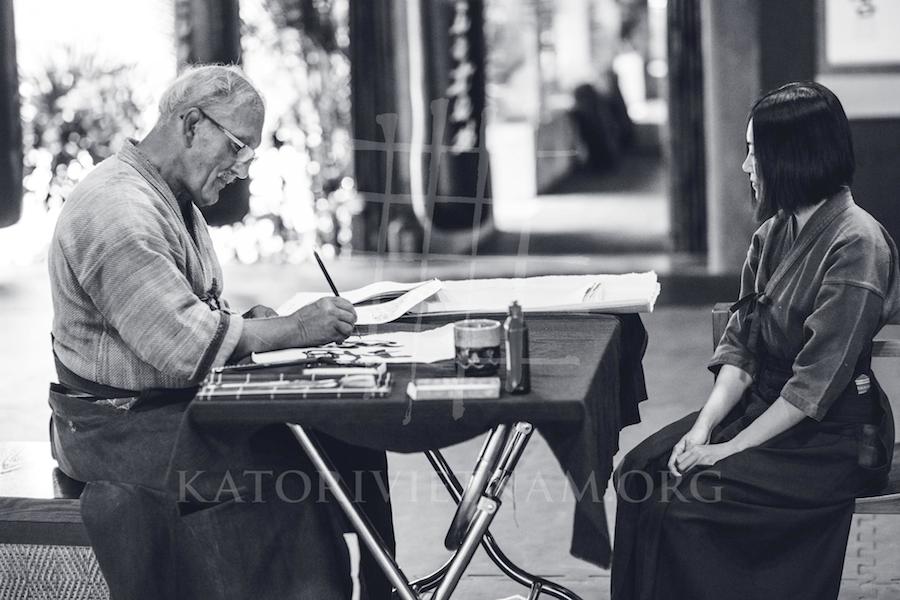 Krieger Sensei being watched as he works

All students then took up their pencils and practiced and attempted to develop their shodo skills. At the end of the last budo class we honored Krieger sensei with an embu. Krieger sensei returned the favour and closed the week-long budo class with a jodo demonstration. 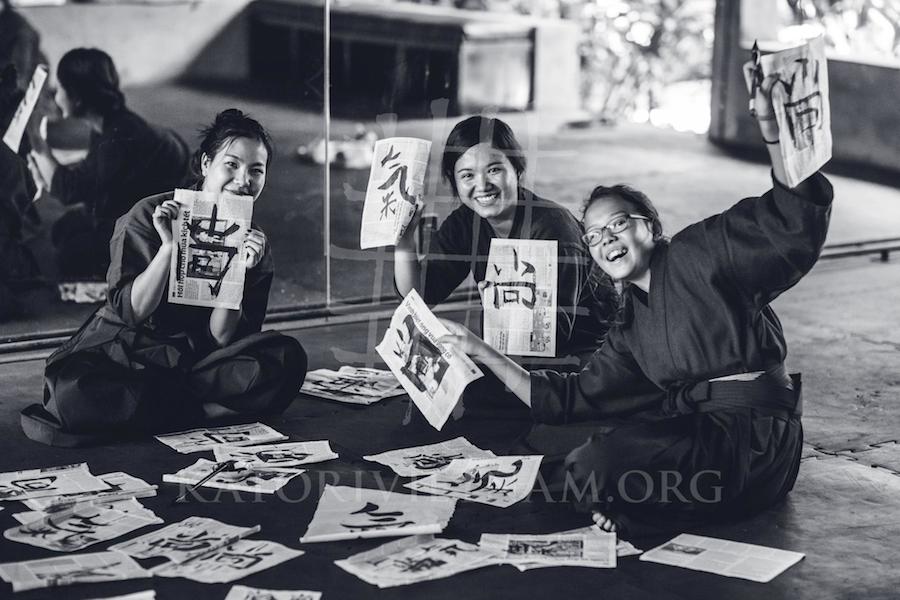 the fruits of a mornings work: kanji on newspapers

In the evening we proceeded to our “bujutsu restaurant” where we drank local minority wines, ravished all sorts of Vietnamese dishes and all of us thanked Krieger sensei with speeches. During the dinner we interviewed Krieger sensei about his experiences in martial arts and his work with Donn. F Draeger: “Draeger sensei trained Dutch judoka Anton Geesink who won the gold medal in the open class as the first non-Japanese at the 1964 Tokyo Olympics. 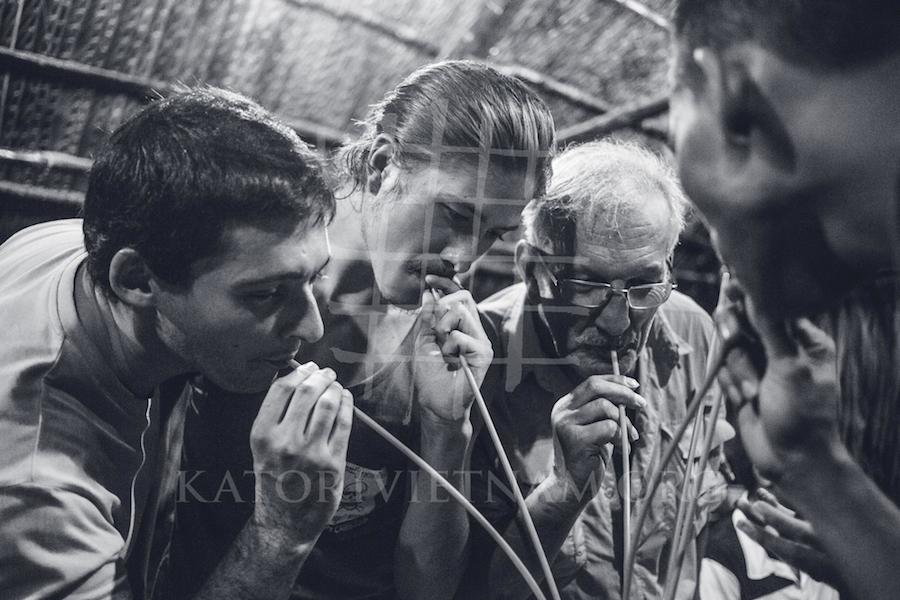 During that match, the emperor of Japan was present. When Geesink received notice that he had won, one of his Dutch trainers was so elated that he wanted to jump onto the tatami to celebrate. However, Geesink signaled for the man to sit down and control himself. This showed Geesink’s understanding and respect for Japanese etiquette as were instilled in him by Draeger sensei.” 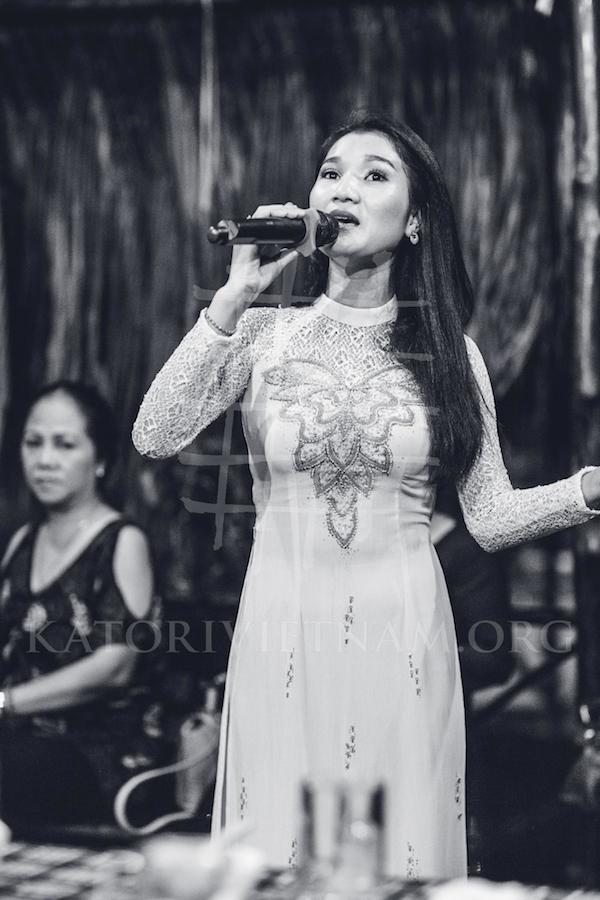 we celebrated a wonderful week with song

Krieger sensei gave our dojo advice on how to proceed and shared some of his life’s stories with us. Later that evening Krieger sensei was serenaded by several local singers of traditional Vietnamese songs. Thank you Krieger sensei and Yanoé for sharing your time and knowledge with us. We have grown as a dojo from this experience. 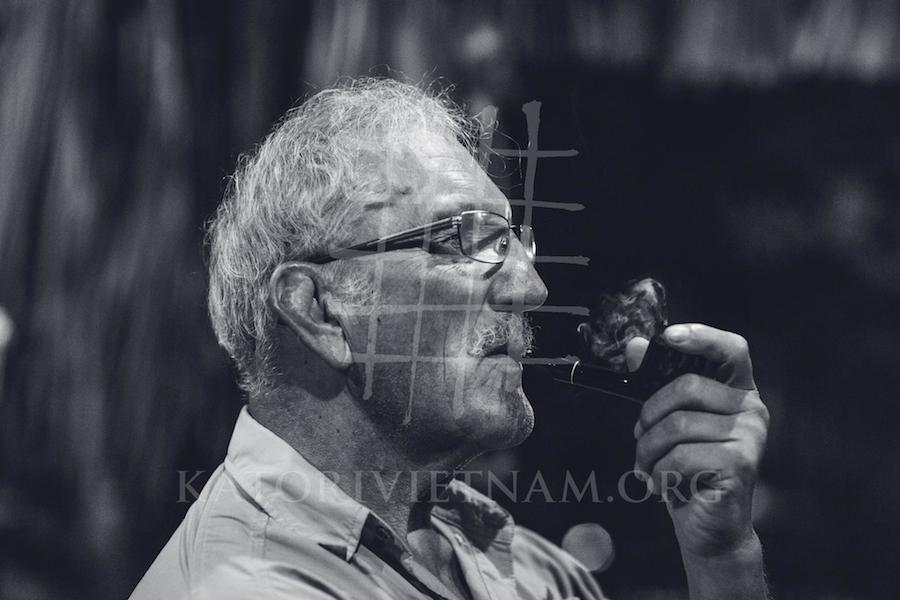