During our 2016 kenjutsu Seminar in Vietnam with Otake Sensei we had the pleasure to be visited by Akiyama san, one of the earliest students of Otake Risuke Sensei. Together with Otake Nobutoshi Sensei Akiyama san worked with all our students for a week. Checking their technique, correcting their form and helping them with principles of kenjutsu. 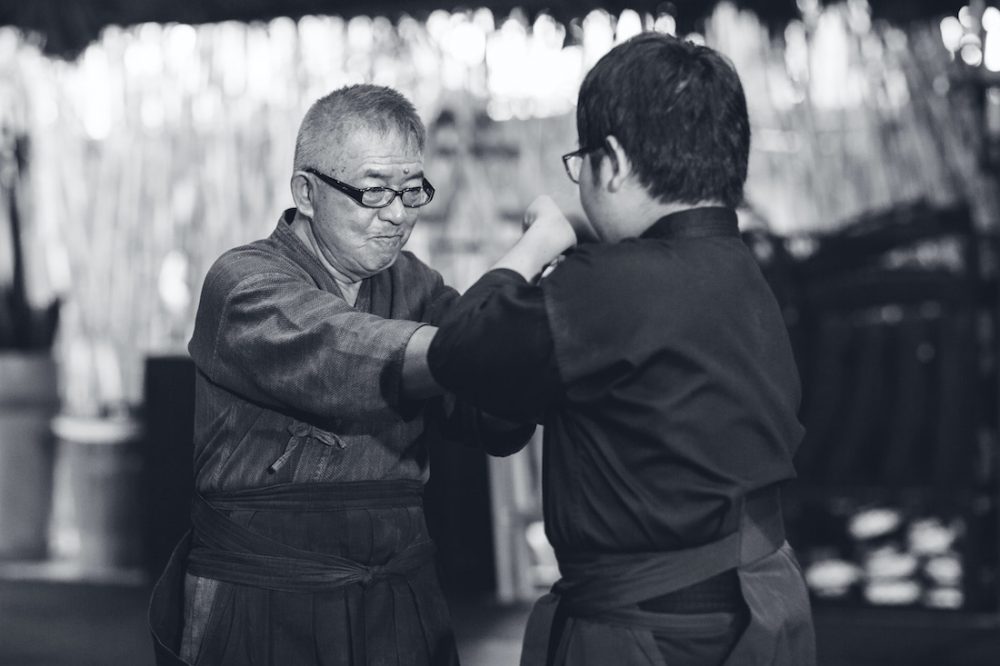 Akiyama san shows real intent when working with us 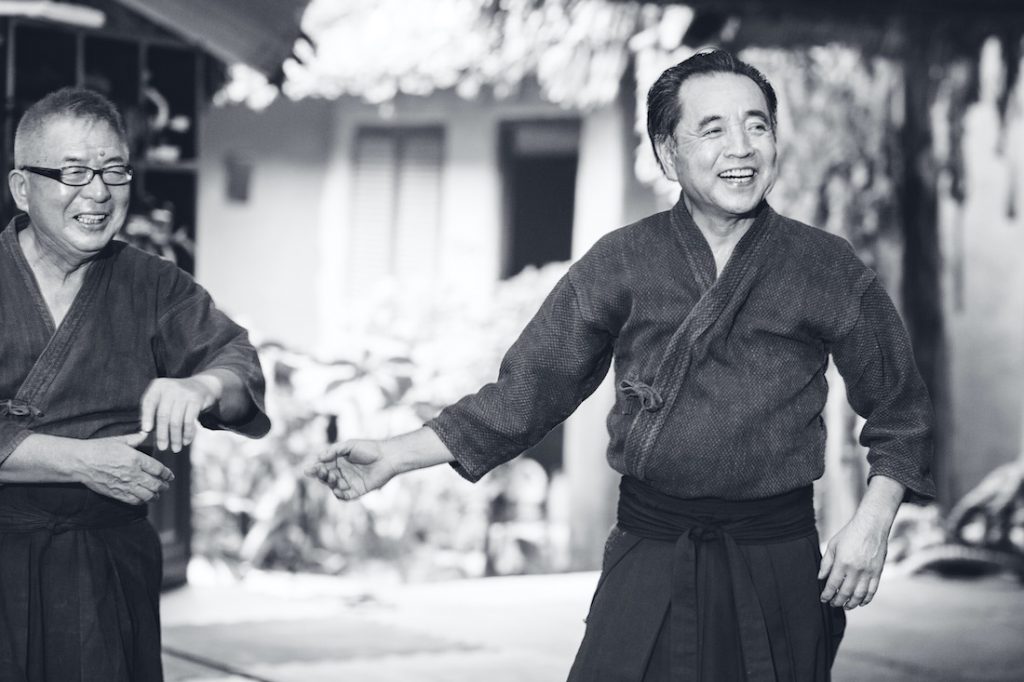 The atmosphere during the seminar was relaxed but serious

For years we analysed that movie and even now still go back to it to see if we have missed anything. How does Otake Sensei move? We look at the kamae, the rhythm, targeting, their maai and listen to their kiai. We watched them so many times that to us he and his students in that clip have become celebrities to us. When we visited Japan we were hopeful that we would meet these students in Shinbukan Dojo. But we did not until very recently. We asked Sensei who they are and learned that they had either moved away from Chiba Prefecture or were too busy in their work to attend training. 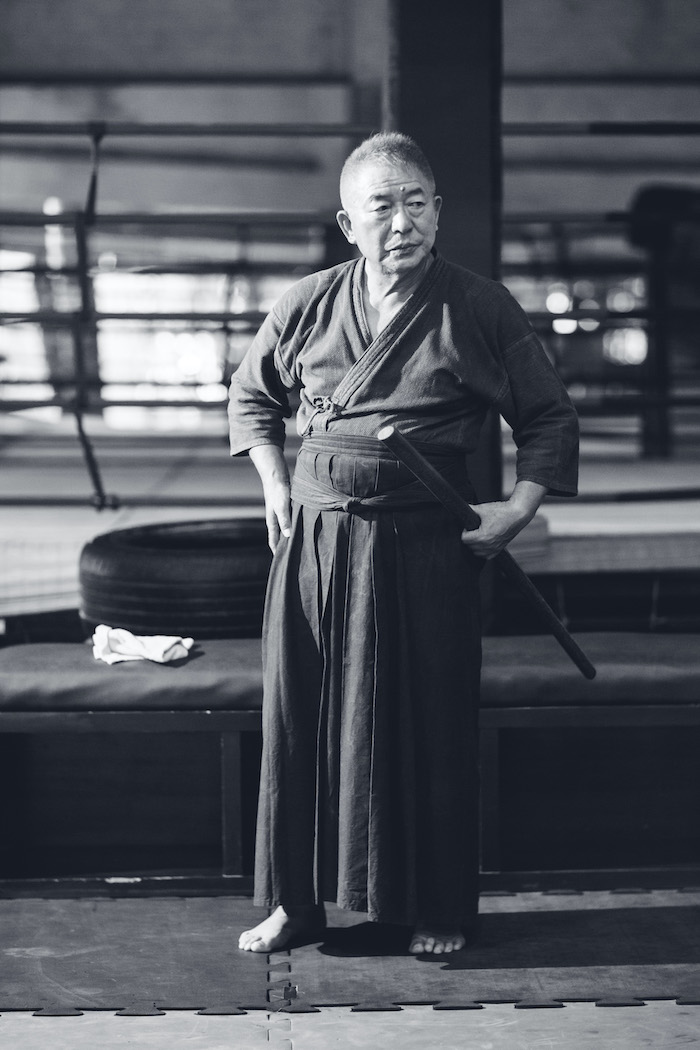 Akiyama san keeps a keen eye on the training

During our stays in Japan we would often take the bicycle to the dojo through the rice fields outside Narita. One day Nobutoshi sensei told us that Akiyama san lived there and had his own rice paddies in that spot. We knew that Akiyama san is one of Otake Sensei’s early students and that  he is one of the people in the movie. From that day on when we drove to or back from the dojo we kept a lookout to see if we by any chance might encounter Akiyama san on the road. 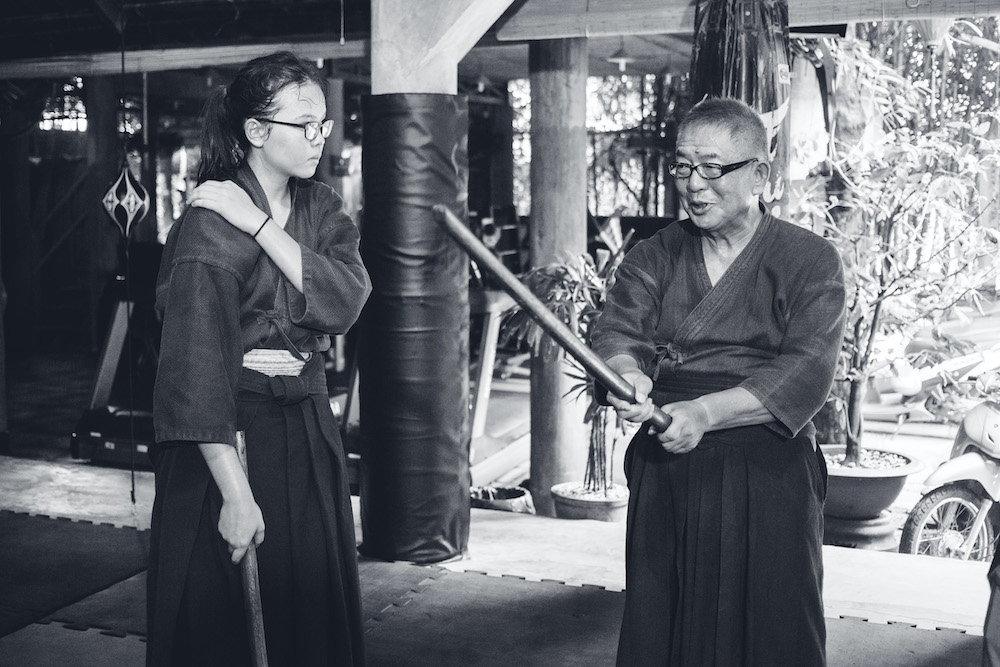 Suddenly in 2014 Akiyama san returned to the dojo. He had been gone for many years. At that time there were many sempai in the dojo but all of them were kohai to Akiyama san. From the moment he returned to Shinbukan Dojo we could feel that this was a special person. Someone with life experience and the strength and modesty that Otake Sensei exudes as well. His technique was and is sharp and mature. 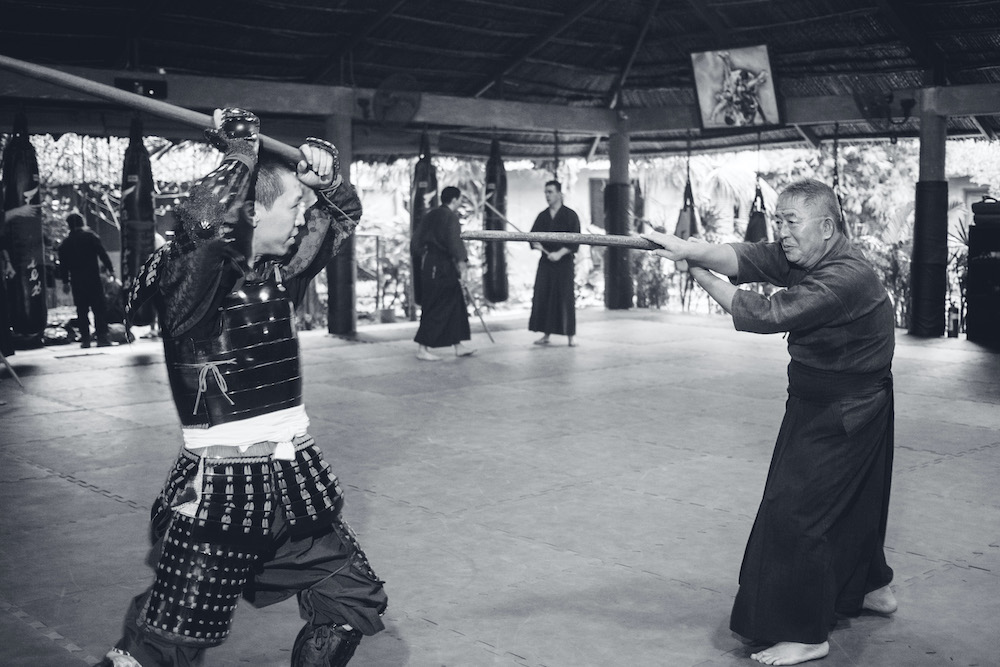 His zanshin is immediate and you can feel that he owns the space around him when you train with him. Another aspect that drew us to him was the fact that he would train with us, correct us and give us advice as if we were his younger colleagues at work. He would do it matter of factly, respectfully and he made sure we would follow up on his advice. Sometimes even commenting on things again at the end of the training if he sees that you did or did not quite get it. His presence greatly improved the training experience at Shinbukan Dojo for many of us. 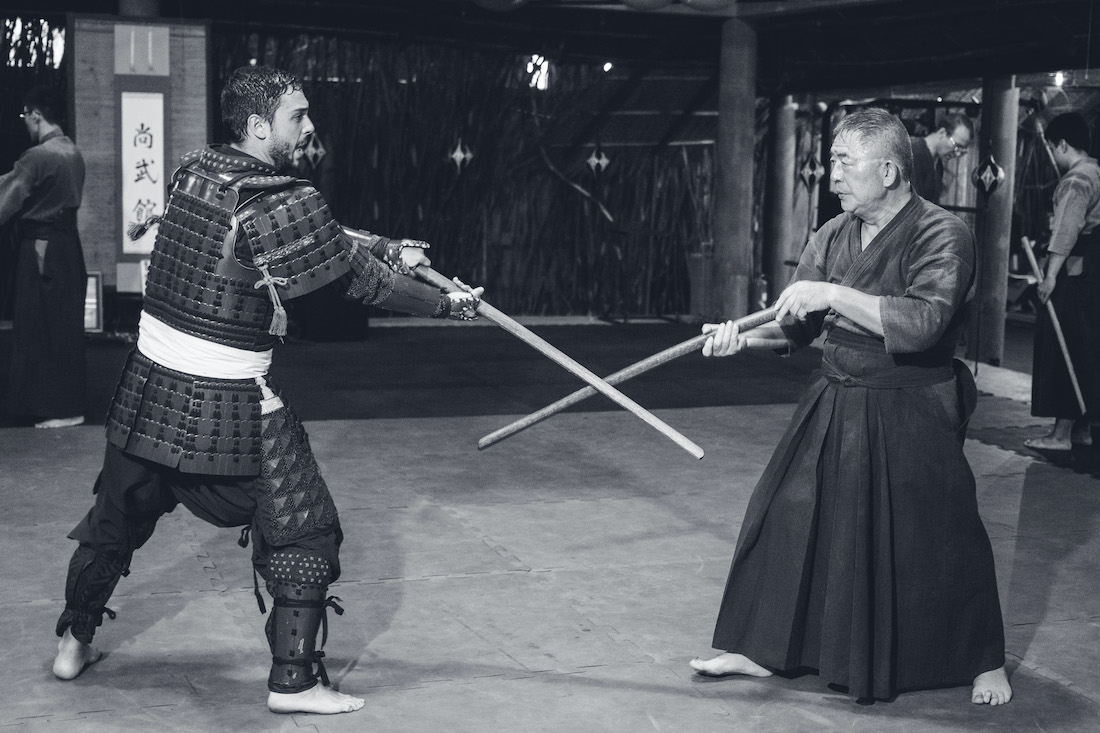 During one of the Shinbukan training sessions in 2015 Otake Nobutoshi Sensei suggested we invite Akiyama san to come and join our kenjutsu Seminar in Vietnam with Otake Sensei. We agreed and the next day we drove to Akiyama’s house in Nobutoshi Sensei’s big Toyota Mark II. He wasn’t home but we were told where to find him in the fields. Otake Nobutoshi drove his limo off the paved road onto a very narrow path between the muddy paddies. 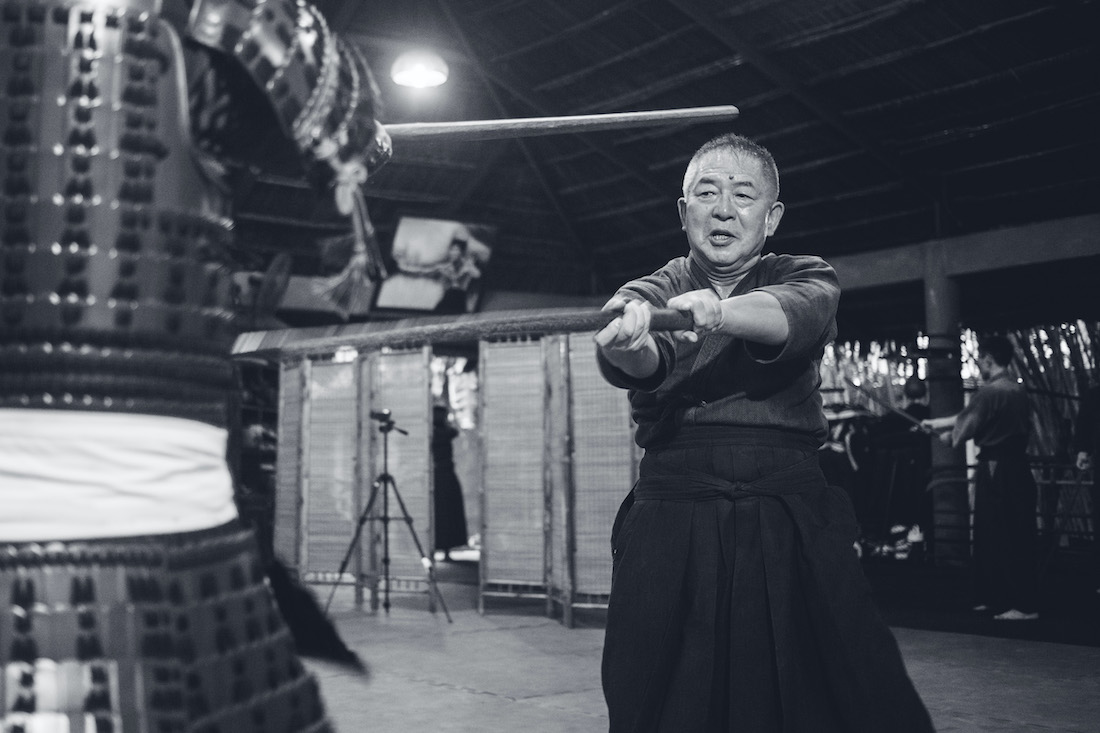 He only stopped because the path become a single track, not because he worried about the lack of space to turn around. Akiyama san dressed like a farmer asked us to excuse his appearance and listened to our proposal. He agreed immediately and Nobutoshi Sensei backed out of the muddy path and drove us back to the dojo. That afternoon we went to HIS to buy tickets for Nobutoshi Sensei and Akiyama san. 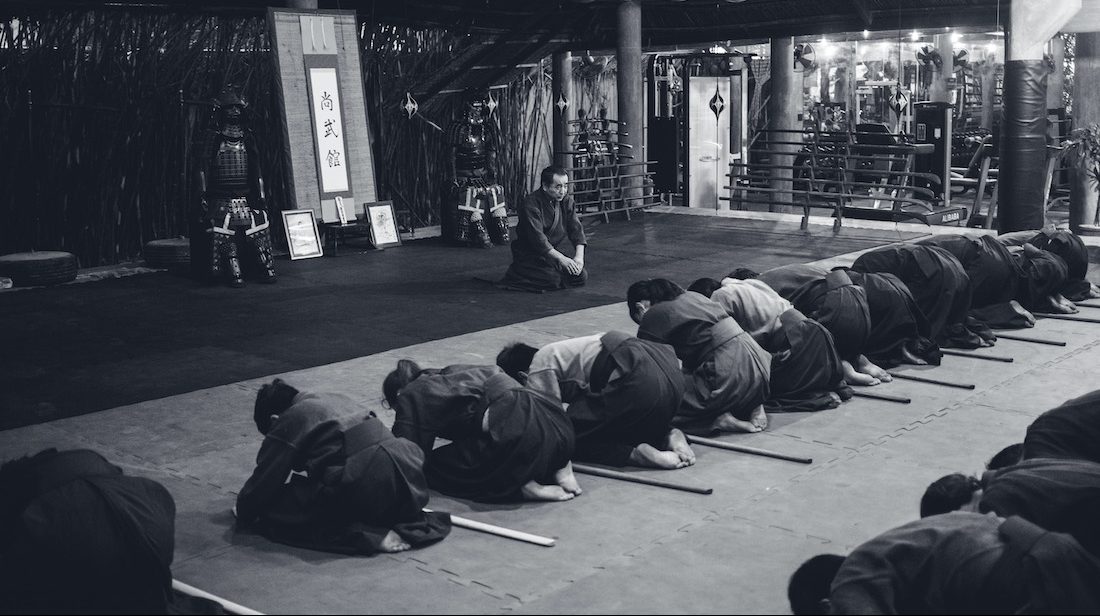 Greeting at the end of the seminar