Japanese Martial Art with a Dutch Touch: Shobukan Dojo in the Media 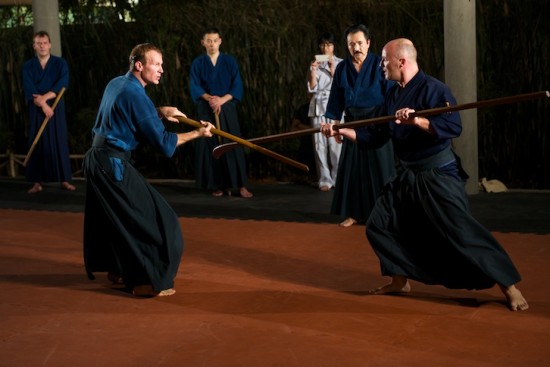 When Malte Stokhof opened his Japanese martial art class in Ho Chi Minh City in March last year, there were lots of classes teaching popular arts from Japan like Aikido, Judo and Karate.

The Dutch expat, who has lived in Vietnam since 2005, was not worried about the competition.

His purpose at that time was to get a partner with whom he could practice Katori Shinto ryu, one of Japan’s oldest martial arts then virtually unknown in Vietnam, Stokhof said.

He had practiced the art all by himself for six years while working for an education support center owned by the Dutch government.

Even though he went every year to Japan to practice with Risuke Otake, headmaster of the art, his teacher told him that he could not train alone anymore. So, the Japanese teacher wrote a special certificate appointing him the leader of Katori Shinto ryu in Vietnam, Cambodia and Laos.

Returning to HCMC, Stokhof opened a dojo called Katori Shinto ryu Vietnam in District 7 and has since become :”Malte sensei”, something he had not originally planned. (Sensei is Japanese honorific used to address people with a certain level of mastery in arts or some other skills, including martial art teachers.)

Stokhof said it is “easy” to recruit students, because in Vietnam there are many young people who want to learn something. But it is “difficult” to fiend students who want to train “seriously”, as everything training course takes three hours nonstop.

“Many people want to try it, but after one or two times, they feel it’s too heavy so they stop”, he said.

He said about 200 students registered at his four dojos, including one in Hanoi, but only 20-30 of them, including seven expats from countries like Japan, Canada and France, attend training regularly.

So far, Stokhof has sent five of his Vietnamese students to Japan at his expenses, so they can practice at Otake’s place, see with their own eyes if that they are doing in Vietnam is correct or not, and establish their own relationships with Katori Shinto ryu in Japan.

“When I go away, they [the students] should have enough knowledge and experience to continue the art in Vietnam”, he said.

Otake, who is now 86 years olds, told Stokhof once that Vietnamese students are among the best.

“They are very young and train just for a short time, but their attitude is so good”, he quoted his teacher as saying. “So, I think Vietnam and Katori Shinto ryu are a good combination.”

Vo Thanh Lien Anh, a student who attended Stokhof’s class more than seven months ago and now helps him manage the dojos’ finances, said he teaches them both techniques and etiquette – how to behave, at least in dojo.

She also said it was her teacher’s enthusiasm for the Japanese martial art, expressed through stories he told during their first encounter at a party that inspired her to take it up.

Stokhof said in Vietnam, people often enroll in Japanese martial art courses, pay money and then attend training in a class with 60 others. But, they only learn how to make movements and take exams, not how to fight.

After a few years, they would want to know if they can get a black belt from Japan, but they cannot because martial art organizations in Japan do not know about schools where they learn, he said.

Moreover, many people open classes one they have black belts, but “it is too early”, according to Stokhof, explaining that a teacher have to be “really good” at atiquette, techniques and keeping atmosphere in the class.

For instance, if one person is physically strong but not friendly, a teacher has to explain to them that to be strong is not important.

“Katori Shinto ryu teaches that if you do martial arts without reishiki (etiquette), respect, and culture, it is just violence. We learn to respect each other. The weak learns to become strong and the strong learns to become modest.

“I want to make the art well-known in Vietnam, not only because it brings health but also because it increases knowledge of culture, history, life, health and many other good things.

“ I want Vietnamese students to have a real martial art here”, Stokhof said. 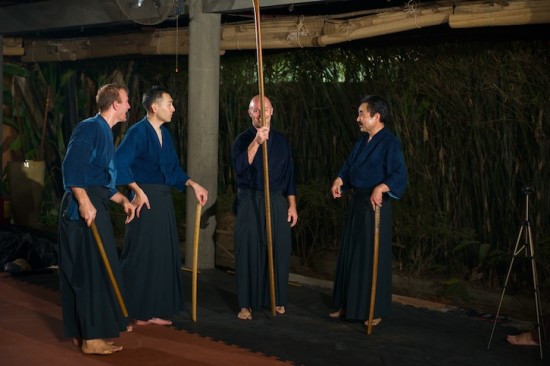 Stokhof said he first practiced Japanese martial arts when he was six years old in Indonesia, where he lived with his parents for 13 years.

After returning to Holland for few years, he went to Thailand and other countries, including Vietnam, to study anthropology.

Wherever he went, he never stopped training in martial arts because it helped him organize his life. “When you come to a strange country and you don’t speak the native language, it’s very easy to get lost”, Stokhof said.

He first came to Vietnam nearly 14 years ago then he was doing his masters degree to do anthropological research with Vietnamese professor Phan Huy Le.

After finishing his course, Stokhof went back to Holland and worked at a university until 2005, when he returned to Vietnam for a doctorate course. This time he took his Dutch girlfriend, now his wife, with him.

Now the father of two children, Stokhof spends time with his family besides working, training, teaching and studying Japanese.

But he does not find his life hectic.

“I feel good because I can see lots of energy and receive help from my students. My family life is good now, and my work is stable.”

In 1960, Katori Shinto ryu became the first martial art to be recognized as an intangible cultural heritage in Japan. Risuke Otake, the art’s current headmaster, was appointed guardian of the tradition.