This text was is published on the website of the Hochiminh Union of Friendship Organizations. It informs the public of a Japanese Martial Arts Day organized by HUFO and Shobukan dojo. 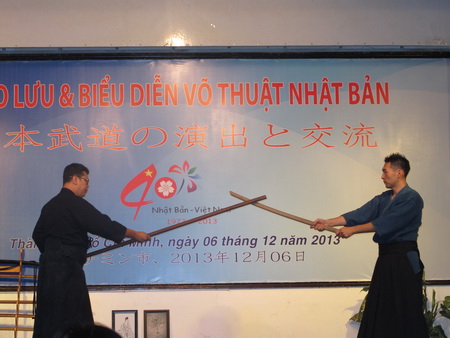 Mr. Nguyen Cong Tanh – Chairman of the Vietnam – Japan Friendship Association, said that good relations between Vietnam and Japan in the past 40 years had been developing in the fields of economy and trade as well as the culture exchanges. The Japanese martial arts performance is one of the series of activities to celebrate the 40th anniversary of diplomatic relations between Vietnam and Japan, the Vietnam – Japan Friendship Year. The demonstration brought the audiences unique impressions on the martial arts of Japan. 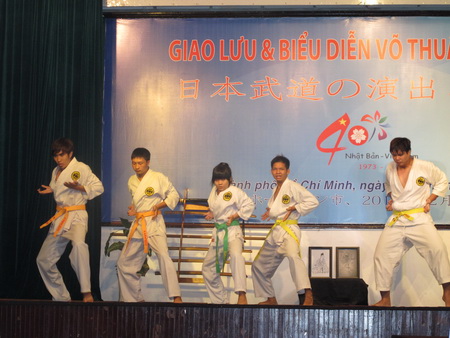 Mr. Inui Hiroyuki – Representative of the Japanese Consulate General, expressed his deep gratitude to all the attendants. He hoped that the show would strengthen the relations and the friendship between the two countries. There were many unique martial arts performances of learners from Singapore, Russia, District 1 Aikido club, and Master Otake Nobutoshi, such as:

Kenjutsu Kendo Aikido Karate Seibukan Shorin Ryu, Bojutsu, Naginatajutsu, and the high-class techniques performed by Russian students. Moreover, the attendants could raise questions to Master Otake Nobutoshi for more understanding about Katori Shinto ryu. Ending in an atmosphere full of friendship, the Japanese martial arts performance was a bridge linking Japanese and Vietnamese culture, and a contribution to tighten the friendship between the two countries.