Tenshin Shoden Katori Shinto ryu teaches the martial arts of kenjutsu (swordsmanship), iaijutsu (sword drawing), bojutsu (staff techniques) and others. Our tradition not only includes such techniques, but also has a broad range of sciences such as chikujojutsu (castle and field fortifications). However we cannot divulge this knowledge here. This text on samurai wooden castles is a very short general introduction to the subject based on other sources. It is meant to give the practitioner and others with an interest in Japanese military history a glimpse into the subject. For more in-depth information please look at the sources mentioned below.

When comparing Japanese castles to Korean and Chinese castles one striking difference stands out and that is the almost complete absence of walled cities in Japan. For the location of castles there were three topographical locations: on a mountain (yamajiro), a hill on a plain (hirayamajiro) or on a plain (hirajiro).

From as early as 950 AD, the mountainous geography and ample available wood from forested areas, led to a style of architecture of fortifications know as the mountain castle. Some estimates suggest that around the early sixteenth century there existed as many as 5000 such simple fortifications or rudimentary castles. These castles were wooden structures. The use of wood for the construction of castles in such areas was continued even after new developments in castle design had been introduced, such as stone castles.

The ideal mountain location was isolated from surrounding mountains, thereby minimizing the risk of an enemy seeing in. The samurai building the yamajiro used the landscape to their benefit and make economical use of the building materials that were on offer. The kept the existing shape of the mountain top or hill. They would cut trees for building materials and to open up areas around the castle to allow for adequate views of the surrounding areas. These open spaces would also provide a free line of fire for their projectiles. They did not cut all trees growing on the steep natural sides of the mountain below the castle. The trees on these sides formed natural barriers for possible enemies moving towards the castle. The trees’ roots would also hold rocks and earth in place and keep the area from washing away due to water running down the slopes.

The castle would include wooden walls or palisades, towers, gateways and domestic buildings or quarters for the garrison, reception and command areas for the military leaders and stables for horses or animals kept for food. Many of of these buildings included store rooms. Although the inaccessibility of these castles made it difficult to attack them, they could be laid siege to. During a siege no access to fresh goods would exist so goods would have to be stored just in case a siege might take place. Another weakness of the yamajiro was their vulnerability to damage from high winds in the typhoon season.

The castles had wooden walls with openings just big enough to shoot arrows through. Other defensive elements included huge rocks or boulders which were hung from the walls on ropes. During an attack the men of the castle would cut these ropes and the rocks would come crushing down on the attackers below. 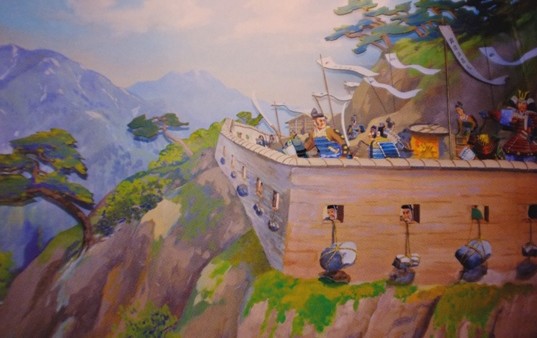 Defenses erected by Kunusoki Masashige against the shogun’s army. Note the rocks held up by the ropes. Source Turnbull S.

The wooden towers often built on different parts of the same mountain ridge had walls as well or movable shields. The towers were connected by paths made of earth which made communications between the different locations possible. From these high positions, archers would shoot their long bows or even use big crossbows which were mounted on stands. These crossbows seemed to have been fearsome weapons highly prized by military commanders. These oyumi were regularly reported to have devastated enemy lines. 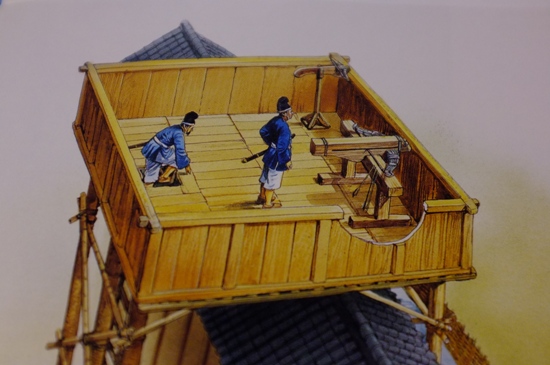 A tower with two oyumi, crossbows 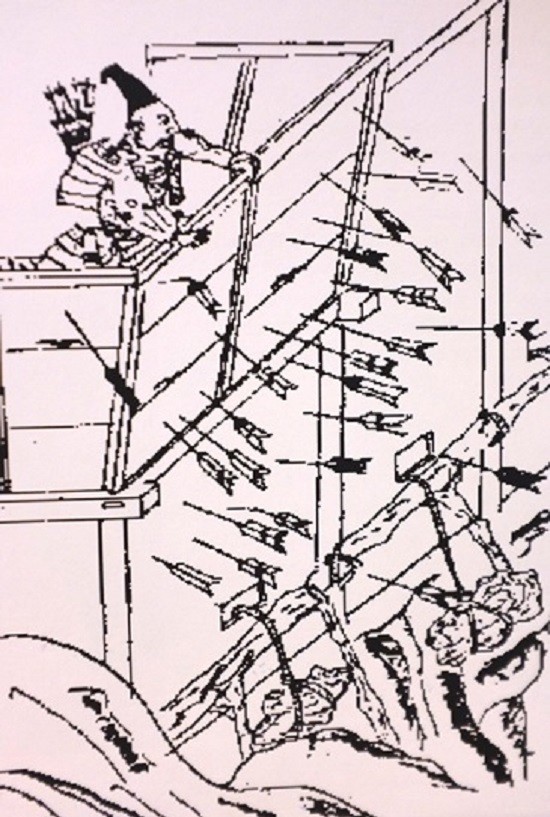 A detail from the picture of the Gosannen War, showing the wooden tower of a yamajiro that has been attacked with arrows. Rocks ready for dropping hang by ropes through holes in the tower. Source Turnbull S.

The natural foundation for these castles were both beneficial because of their location but at the same time also limited the size and longevity of the yamajiro style castles. If too many trees had been removed, the foundation would be prone to erosion and over time this would endanger the foundation of the building. The highest they would build was three stories and this included a tower that had rooms. Higher towers had to be built so light that they often had no walls. To keep the soil from being washed away they would allow grass to grow in areas where the trees had been removed.

Heavy rains still affected the area and the castles. If there were no typhoons, earthquakes or sieges, the castle would have to be repaired thoroughly every five years. But with Japan’s reputation for earthquakes it will be clear that these structures were in need of repair more often. The only way to strengthen the base of the castle was to introduce the use of stone and this would lead to most enduring visual features of the Japanese castles left to us today.

Clements J. (2010) A Brief History of the Samurai, Running Press