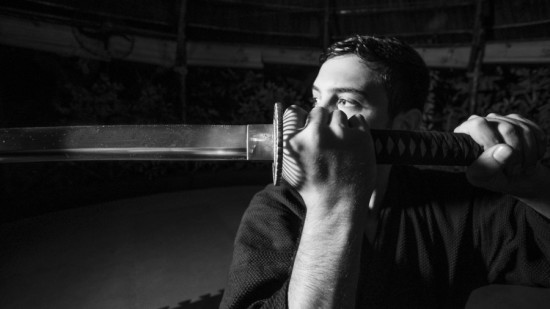 English student is training in Shobukan dojo of Katori Vietnam

It’s just after 8am on a Saturday morning, and all around us the sun has announced itself on the stone path outside the dojo. My training partner, Cong, crosses his wooden sword over mine. “Now,” he says, “I’m your enemy.” Considering the patience with which he’s corrected my every mistake, I take this as a joke. But when I look up, the Cong I met earlier this morning has disappeared. In his place, a wide-eyed stranger stares me down from across our weapons. The new Cong lunges forward and our wood blades connect with a dull thud. He attacks and I step aside, turning my sword to deflect him. Darting left as he advances, I pivot and, with all the power in my arms, bring the sword down over his head. Cong stops me inches from his skull, and I relax my grip, suddenly aware of the adrenaline coursing through my body. When I step back, the quiet, patient Cong has reappeared, half-smiling as he returns his sword to its imaginary sheath, thanks me in Japanese, and walks away.

In addition to Cong, four other students have come to the dojo this morning to practice katori shinto-ryu, one of Japan’s oldest form of martial arts. Once used to prepare samurai warriors for battle, this style of Japanese swordsmanship dates back to 1460 and includes training in empty-hand combat as well as long and short swords, spear, staff, glaive, and shuriken — or thrown object — techniques. The martial art remains largely unchanged despite its roughly 550-year history. Students still are required to take a blood oath in order to train in the martial art, and the techniques that Cong and I use to kill each other theoretically are the same ones responsible for countless actual deaths centuries ago.

Katori Shinto Ryu found its way into Vietnam through Malte Stokhof, a Dutch expat who has lived in the country on and off since 2000. An avid martial artist, Stokhof trained in judo and aikido as well as Thai and English boxing before discovering Katori Shinto Ryu in 2006. After spending almost three months at a Japanese dojo in 2007, where he trained intensively under the supervision of Otake sensei, the current head master of the martial art, Stokhof was hooked.

“I came back basically every year, once or twice,” he says. But his location presented an unusual challenge. “Because I lived in Vietnam I didn’t have the opportunity to train much with a partner, so I had to do it by myself.”

On a return trip to Japan in 2011, Stokhof explained his predicament to Otake sensei. After much deliberation, the head master presented Stokhof with a teacher’s license and the permission to set up a dojo. Stokhof then began seeking potential students, a difficult task because katori shinto-ryu remains quite unknown in Vietnam. 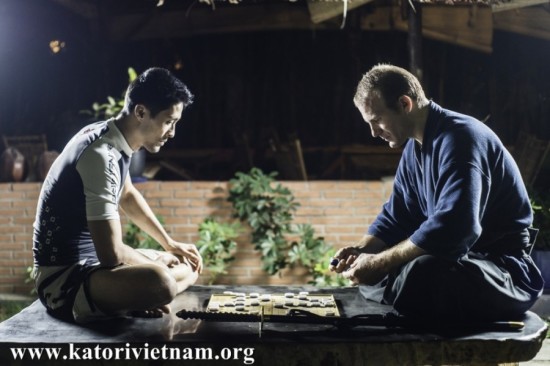 “After one week, I found out it’s totally amazing,” says Phan Thanh Tung, one of Stokhof’s first students. “I really enjoy the art inside katori. It’s not just like moving and [you] don’t understand anything. [In] katori, there’s no, you know, like meaningless movement.”

Another Katori Vietnam member, Pham Dinh Bang says, “The reason [Katori Shinto Ryu]‘s stayed long, I think it’s because it’s applicable. When you are training, you just do your job. It’s just, follow them and see their error so that we can attack them in time. Just like in business life, it’s not about you doing your own business, it’s also waiting for them to do something and then you attack when they are weak.”

Since its creation in March 2012, Katori Vietnam has grown to 15 members. The group is mostly young men but also includes two female students as well as some older males. Although growth has been slow, nearly all of Katori Vietnam’s original students remain at the dojo, which is owned by action star Johnny Nguyen. Stokhof is optimistic that with more visibility they will continue to attract new members.

Since the group’s inception, Stokhof and other members have made a habit of visiting other dojos to introduce themselves and encourage cooperation among different martial arts communities.

“The connection between martial arts in Vietnam and foreigners is very low,” Tung says. “They just train by themselves, and that’s why the techniques go down through generations. I really want to connect Vietnam to the international community.”

Drawing upon his extensive connections abroad, Stokhof hopes to bring other martial artists to the country as well. Katori Vietnam’s ultimate goal is to act as a hub for martial arts, connecting dojos within Vietnam to those abroad, and to promote not only the physical benefits but also the culture and history of one of Japan’s most storied martial arts.