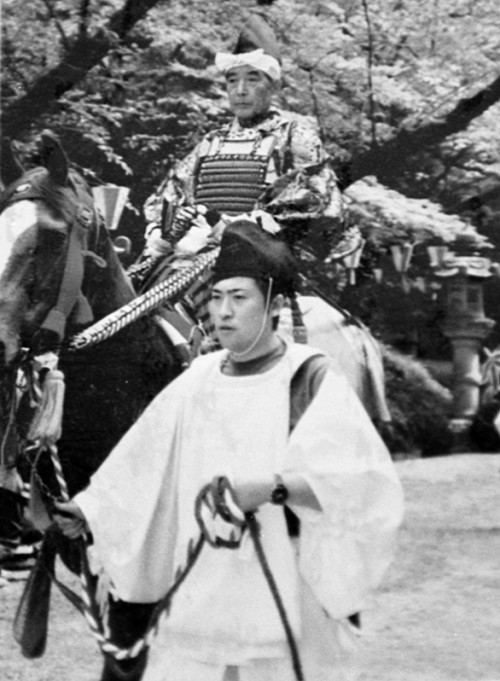 Tenshin Shoden Katori Shinto has a strong historical and spiritual connection with the sacred Katori Jingu, Katori Shrine in Japan and its 800-year-old festival: the Jinko-sai. 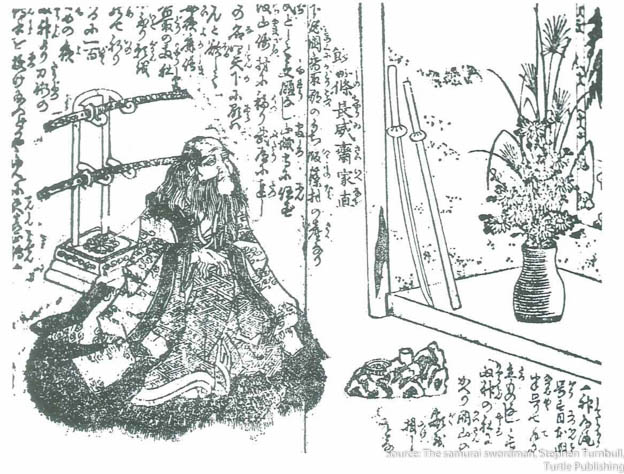 Tenshin Shoden Katori Shinto ryu’s founder Ienao was born in Chiba. He was renowned as a great swordsman. Later, Ienao went into seclusion at Umekiyama, a place located near the innermost precincts of the Katori shrine. During that time, it happened that one of his devoted disciples was washing a horse in a spring near the Katori shrine. A short time later the horse began to suffer pains and died very soon thereafter. Ienao marvelled at the far-reaching effects of the divine power of the God of Futsunushi. Ienao understood that this god was responsible for the death of the horse. At the age of sixty, Founder Ienao decided to come to Katori Jingu and prayed there for 1000 days and nights. During this time, after the purification, Ienao began his martial art journey.

It was while he was in the state of spiritual discipline, that Ienao perceived a vision of Futsunushi-no-Mikoto. The deity, appeared in the shape of a child, seated on a branch of an old plum tree near Ienao. The deity gave Ienao one scroll named “Mokuroku Heiho no Shinsho” and said: “Thou, shall be the greatest master of all swordsman under the sun.” After this experience, Iizasa Choisai Ienao founded his own martial art school. 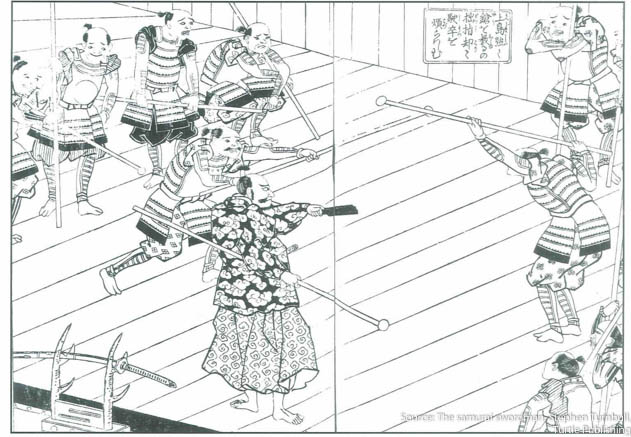 Katori Jingu and the Jinko-sai Festival

Katori Jingu – 香取神宮–one of the most ancient and sacred shrines and temples in Japan –is located in Katori city, Sawara, Chiba Prefecture. In ancient Japan, Katori Jingu was the second most important shrine, just after Ise Jingu – the center temple of Ise. At that time, together with Ise Jingu, only Katori Jingu and Kashima Jingu were named “Jingu- 神宮”. This is the highest designation for shrines in the Shinto Shrines system, used only for shrines with imperial connection.

Katori Jingu received this rank because the main God (Kami) of Katori Shrine is Futsu-nushi-no-mikoto -經津主大神. In Japanese mythology, the God of Futsunishi pacified the land of ancient Japan, and gave it to the God of Ninigi-no-Mikoto, from whom royal ancestors came forth. So, the God of Futsunushi is also regarded as the guardian God of the country and the royal family. Moreover, with victory against Okiunishi, Futsunishi was worshiped by the samurai class. They considered him the God of Victory and the ideal model for the moral and dignity within Samurai class. 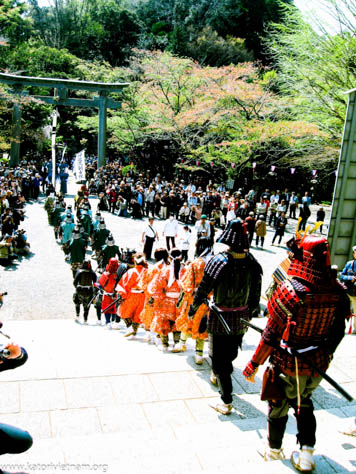 According to Japanese Shinto tradition, people celebrate festivals (matsuri) to worship the region’s Gods following the ancient and particular customs of each region. Festivals are also opportunities to thank the Gods and pray for good fortune. Each festival is usually connected to the most sacred shrine in the region. With Katori Jingu, all festivals take place on the fourth of April every year. Katori Jingu’s festivals are held with Royal approval. Every twelve years, on the year of Horse in Lunar calendar, Katori Jingu holds the Jinko-sai – 神幸祭, in 2 consecutive days. This is the largest festival among the shrine festivals. Even imperial members attend because the festival relates to the pacification of Izumo region Futsunushi-no-mikoto and Kashima-no-mikoto. 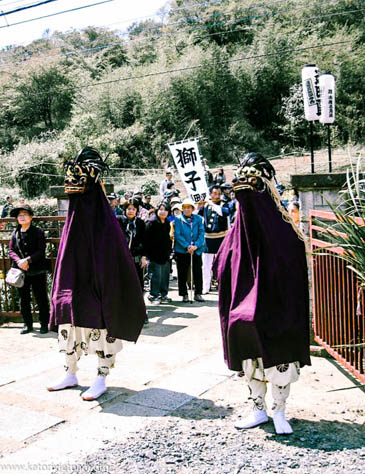 During the festival the whole city is re-created as in ancient times. A procession travels on horses or carriages through the streets. Tenshin Shoden Katori Shinto ryu monjin partake in this procession. 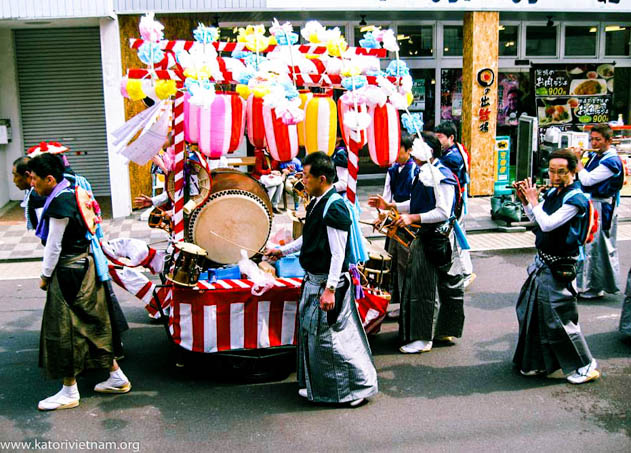 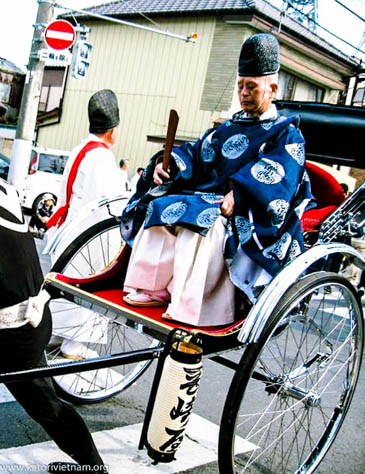 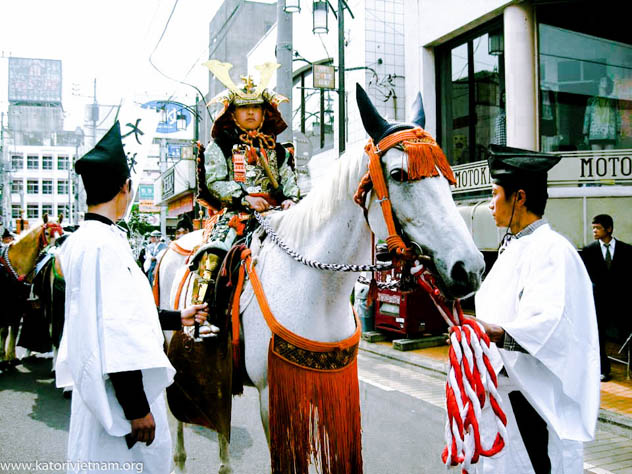 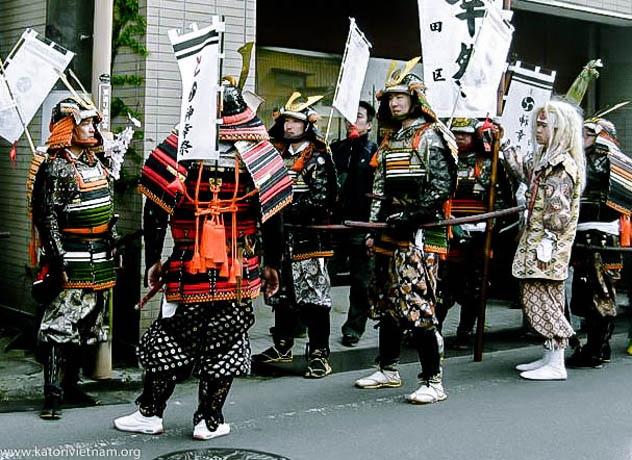 In the parade of people wear traditional clothes, representing different classes of ancient Japan. The parade is led by a group in yoroi who represents the samurai class. 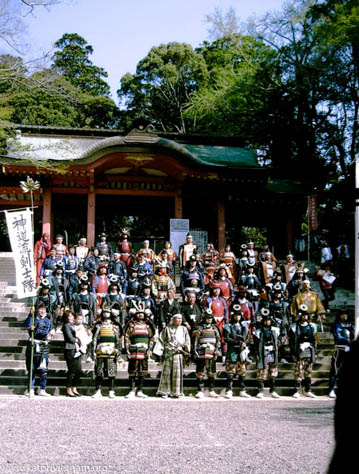 Every time the festival is held, representatives of Katori Shinto Ryu Dojo from all over the world gather at Shinbukan Dojo and travel to Katori Shrine for the festival. During the festival, they become warriors under the command of Gods. Leading them is none other than Iizasa Yasusada sensei, soke and direct descendant of Iizasa Ienao Choisai in the Iizasa family. 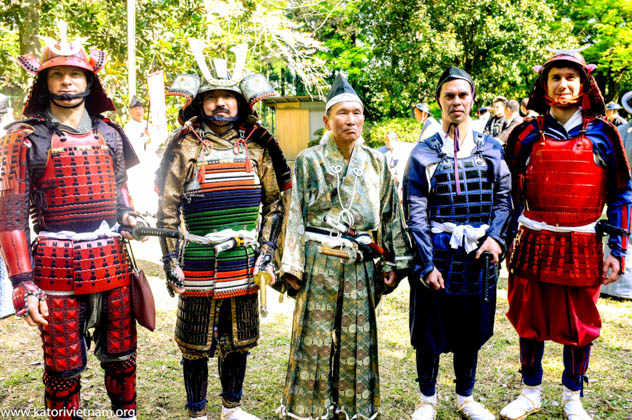 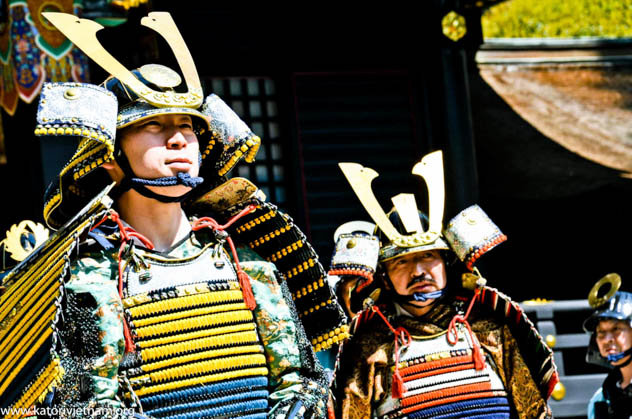 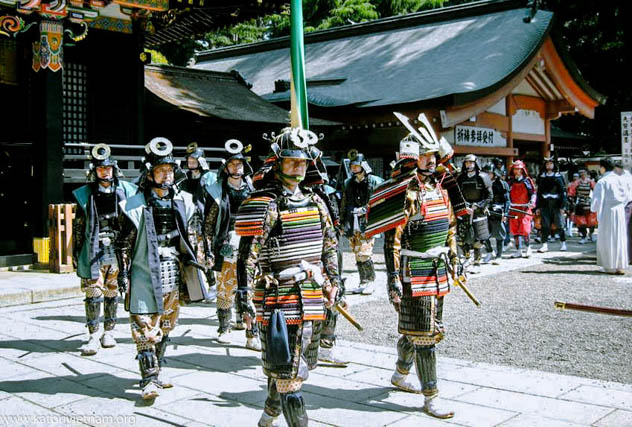 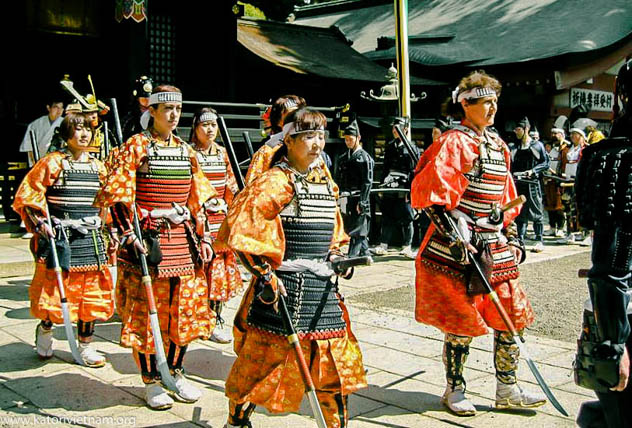 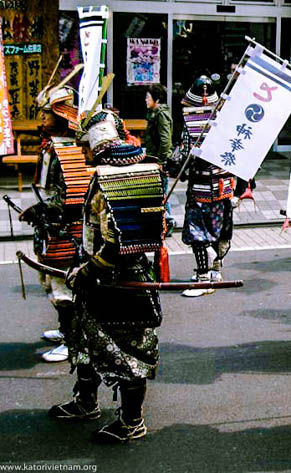 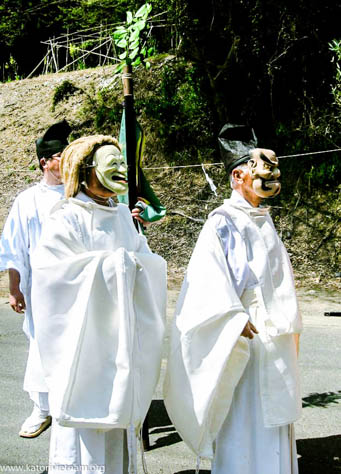 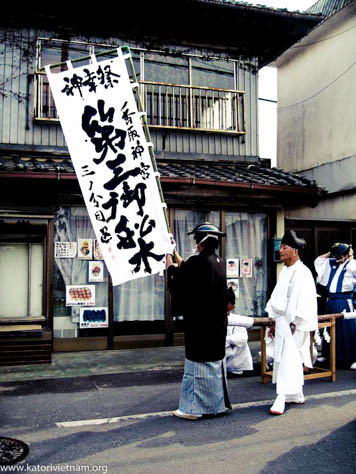 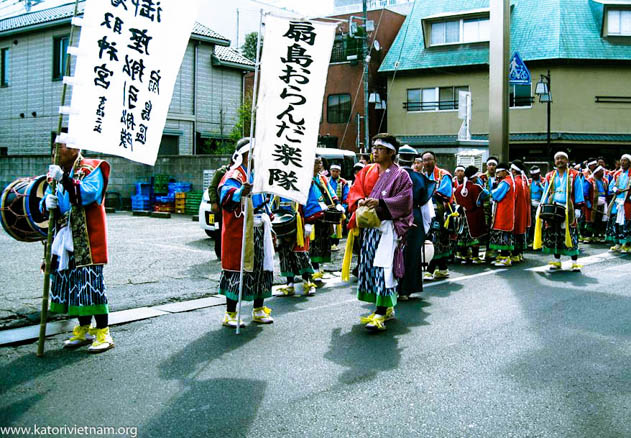 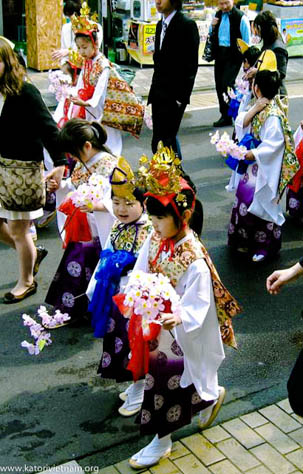 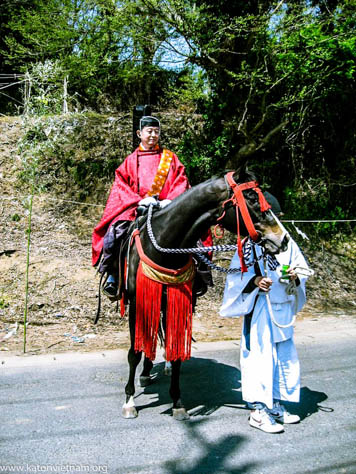 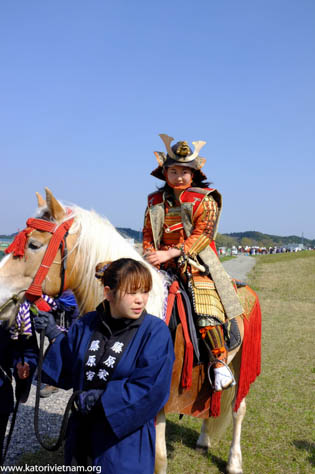 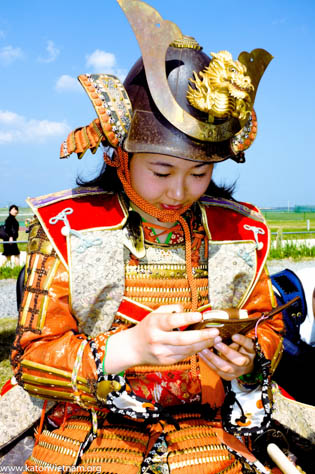 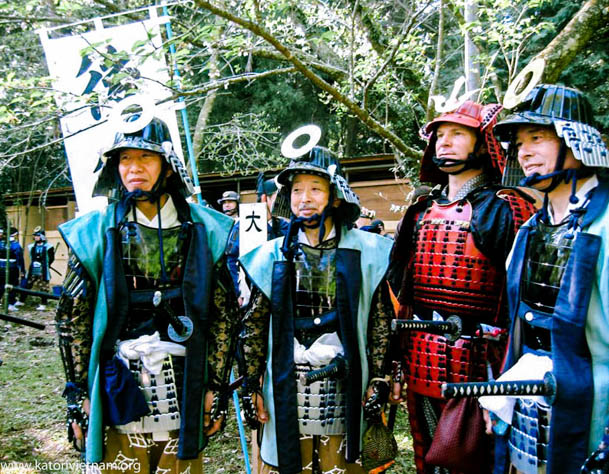 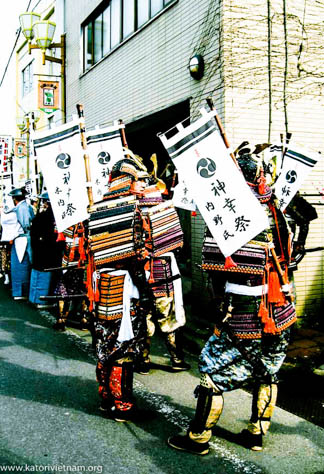