Kenjutsu to Kendo: A Brief Look At their History

Kenjutsu to kendo — The Bujutsu were formed by an elite to defend a group whose existence was – or could be – threatened. The notion of combat is inherent. A bujutsu has to be practical. Kobujutsu (classical bujutsu) like Katori Shinto ryu kenjutsu were developed for professional warriors to allow them to fight other professional warriors – implying a very high technical proficiency. 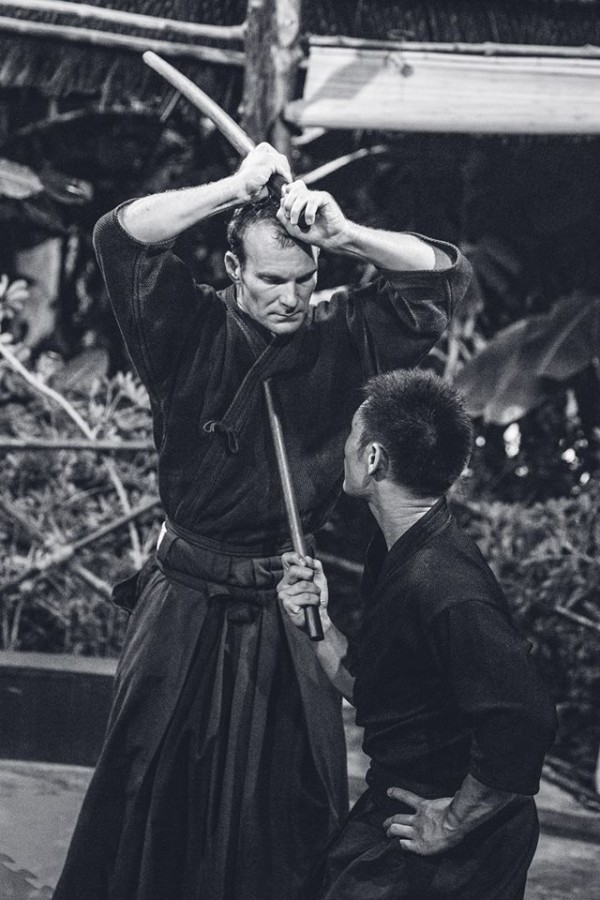 Kenjutsu in the pre- Edo periods was specifically an art of aggression. In spite of its very practical nature, a thorough study of this art will show to that in addition to its technical aspects it contains great philosophical depths. Many warriors found that the practice of kenjutsu inspired a sense of inner-peace and an outlook on life that made them abhor the killing of fellow human beings. This is one of the aspects that have led to the development of kenjutsu to kendo. The search for inner-peace and the development of the spirit of the individual according to the values taken from zen Buddhism led to swordsmanship  becoming a vehicle of the “do”, or “way.” 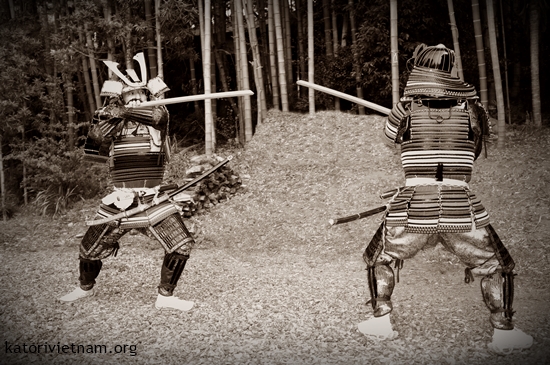 Krieger sensei, in his book The Way of the Stick, wrote:

“…if Bujutsu tended to produce young men competent and efficient on the battlefield, with an iron will, and who were swayed only be notions of honour and loyalty, Budo advocated a much deeper study. The Budo adept had to seek harmony with nature. His daily training inclined towards an ideal human behavior, which in turn, exalted the individual and, accordingly, the society in which he lived. Here the difference from kenjutsu to kendo become apparent. The cultural aim of Do was to simply permit someone to be himself, without ostentation, and to benefit from enriching encounters with others. The Do led to an overall understanding of life through an intense personal experience. The Do forms, therefore, fostered an attitude towards life from the particular to the universal.”

Tenshin Shoden Katori Shinto ryu is Japan’s oldest historically proven martial tradition. The makimono (hand-scrolls) that record the teachings of this ryu contain a clear emphasis on the ethical conduct of swordmen. They teach that kenjutsu, an art developed to defeat enemies, is not to be indiscriminately used.

This is part of a hand-scroll attributed to Izasa Choiisai Ienao, founder of Tenshin Shoden Katori Shinto Ryu, on kenjutsu techniques

This sense of moral awareness is intrinsic in the teachings of the founder of the ryu, Iizasa Ienao (1386-1488). Ienao was appointed an instructor of kenjutsu to Yoshimasa, the ninth Ashikaga shogun (1435-90), but retired soon after his appointment to avoid involving his knowledge in the malpractices of Yoshimasa’s bakufu. Yoshimasa had sanctioned Ienao’s teachings, but the high-principled Ienao refused to accept this and withdrew from public life. Changing his name to Choiisai Ienao, he continued his martial study at the Kashima and Katori shrines (in present Ibaraki and Chiba prefectures, respectively), traditional centers of bujutsu study. There he brought his teachings to a high intellectual level and influenced a great many swordsmen, of whom Tsukahara Bokuden (1490-1571) was perhaps the deepest and most introspective thinker. 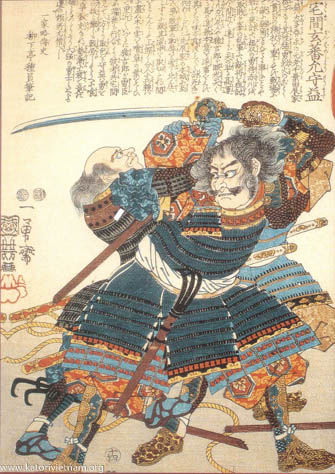 Bokuden studied kenjutsu with his father, a Shinto priest at Kashima Shrine, with his father-in-law, and with many of the famous kenshi who resided in area of the Katori and Kashima shrines. Bokuden’s skill grew to prodigious heights, and as a kenshi he is alleged to have been undefeated in thirty-nine fights. But Bokuden was overtaken by the spirit of self-reflection. Later he developed what he referred to as the “mutekatsu ryu”, a kind of swordsmanship in which no hands are needed. The following well-known anecdote reveals the nature of this development. 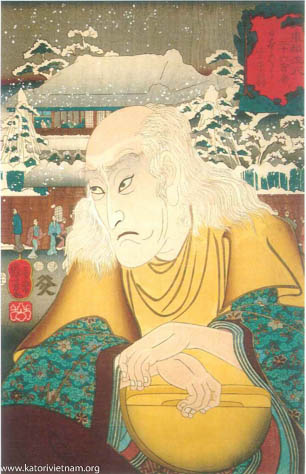 One day as Bokuden was crossing Lake Biwa in a small boat crowded with passengers, a swordsman was boasting of his unmatchable skill with the sword. His loud manner caught the attention of all passenger and the oarsman. Only Bokuden, apparently asleep, ignored him. The braggart, disturbed that anyone should fail to learn of his skill, shook Bokuden rudely from his sleep and defiantly asked what ryu of swordsmanship Bokuden followed. Bokuden replied: “The mutekatsu ryu”.

“What’s that?” asked the swordsman. There upon Bokuden explained that this style of swordsmanship was the highest form of skill possible with the sword, for it relied on the use of no hands. Bokuden’s answer made the swordsman angry. He shouted: “You mean that you can defeat me without using your hands?” Bokuden replied quietly in the affirmative.

“But why then do you carry two swords?” asked the braggart swordsman, growing still angrier. 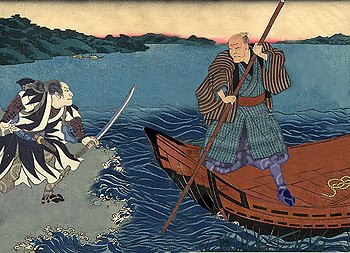 ” I use my swords only to vanquish my own selfish desires,” answered Bokuden. The swordsman, now fully enraged, ordered the oarsman to head for the nearest land, where he might engage Bokuden to settle the issue. But Bokuden voiced concern about the combat and suggested, instead, that they go to a small island nearby. The swordsman agreed. As the small boat was beached on the island nearby the impatient swordsman leaped ashore, threw off his cloak, and stood ready for combat. Bokuden rose slowly from his seat, removed his jacket, and to all eyes appears about to follow his challenger ashore. To the great surprise of all, especially the boastful swordsman on the beach, Bokuden then quickly picked up an oar and shoved the boat out into the lake. As the stranded swordsman bellowed with rage, Bokuden called out to him in a calm but clear voice: “This is how the mutekatsu ryu defeats the enemy.” 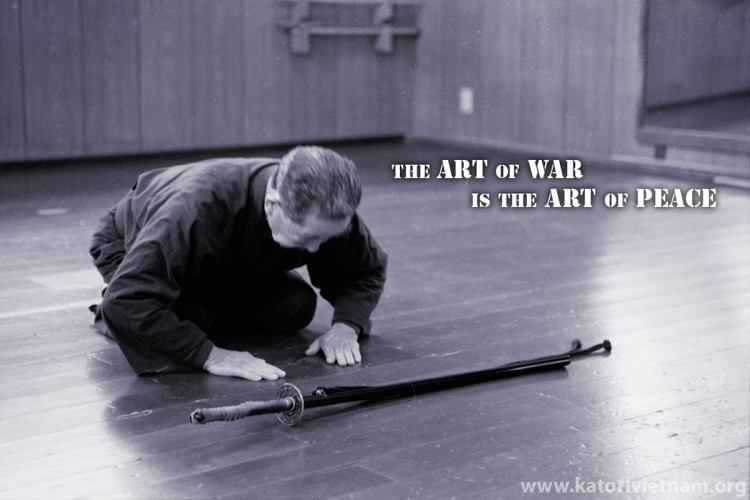 Bokuden’s “mutekatsu ryu” is based on a principle that has a much deeper meaning than is indicated by the humorous incident alleged to have happened on Lake Biwa. It is principle based on original thought that is traditionally credited to Bokuden, though it is possible that he was conditioned by the thinking of other kenshi at the Kashima and Katori shrines, in particular those of the Katori Shinto ryu and Kashima Shinto ryu. The “mutekatsu” principle is traceable to the teachings of the Zen master Takuan (1573-1645). He stated: “Some think that striking [with the sword] is to strike. But striking is not to strike, nor is kiling to kill.” Takuan was closely linked with the swordsmen who gathered at the Katori and Kashima shrines in the seventeenth century. His philosophical teachings affected the greatest swordsmen in his and succeeding ages. What can be gleaned from the transition of kenjutsu to kendo? Do is opposed to the term jutsu. Do is meant to express mastery of self of self-cultivation. Its aims are to become enlightened through the training of arts such as kendo, aikido and judo.

For text this we follow Donn F. Dreager’s work on Classical Budo. Tenshin Shoden Katori Shinto ryu was popularised in the west by extensive research and writings of Donn F. Draeger (1922–1982).